HOW DOES SANTA COVER THE WORLD IN ONE NIGHT – OUTSOURCE 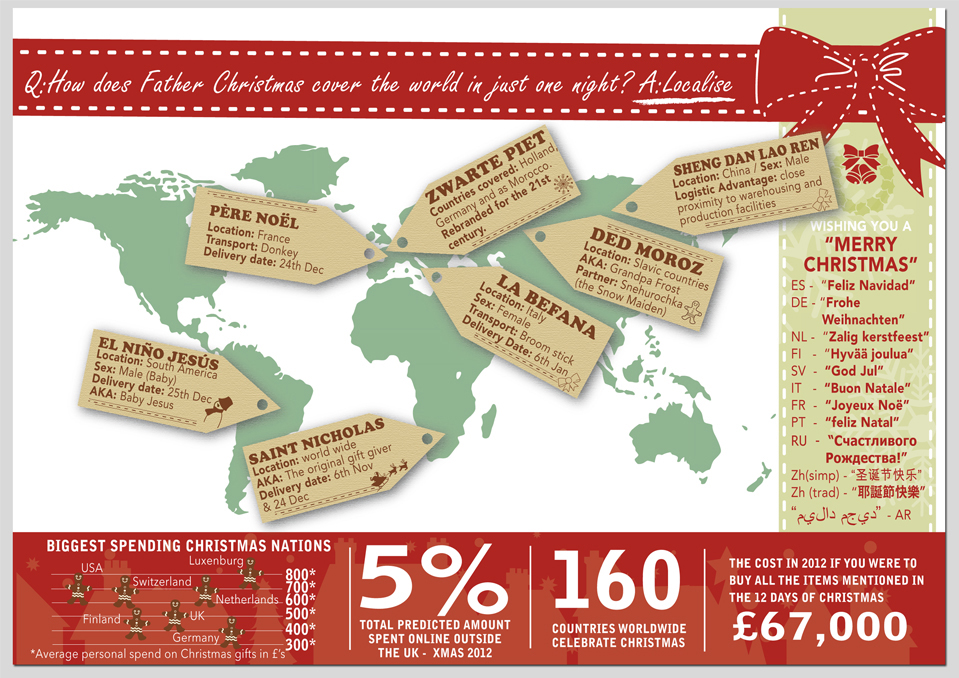 Question: You have millions of gifts to distribute, a very limited timeframe, over 24,000 miles to traverse, and 195 countries to visit – how do you fit it all in? Answer: You outsource your labour and localise your service.

And so with a need to reach an ever more connected audience spread through a very diverse world – that’s what Father Christmas (Santa Claus to our American colleagues) has been doing for many, many years.

These localised versions that make up the Christmas multicultural delivery network vary from nigh on carbon copies (complete with beard and bulbous toy laden sacks) to different genders and even different life forms. Here is our guide to the world’s best known seasonal gift givers.

LA BEFANA Italy’s answer to Father Christmas is Befana. Not making an appearance until the religious feast of Epiphany on January 6th, this kindly witch astride her broomstick leaves toys, sweats and fruit for the good girls and boys – coal, onions and garlic for the bad ones.

DED MOROZ Helping to distribute gifts in many Slavic countries Ded Moroz (Grandpa Frost in English) is an elderly gentleman akin to Father Christmas in his appearance but perhaps more bumptious and virile in nature – dishing out punishment as well as rewards. He is aided by his Granddaughter – Snehurochka (the Snow Maiden) who around New Year will appear with Ded Moroz bearing gifts.

ZWARTE PIET Originally tasked to deliver punishment to naughty boys and girls, Zwarte Piet’s (Black Peter) Yuletide assignments have undergone a makeover in recent years, seeing a shift in his duties as a piratical monster figure to a kinder more gentle ‘elf’ like creature who aids St. Nicholas in distributing gifts to good girls and boys (as well as bad ones). A popular figure in Holland and Germany Zwarte Piet can also be found in some African countries such as Morocco.

DAS CHRISTKIND With a delivery network stretching across Central and Eastern Europe Christkind is a blond haired angelic child-like sprite who’s delivery schedule coincides with that of Father Christmas.

EL NIÑO JESÚS In many Latin-American countries as well as Spain the allocation of presents is arranged by the figure of El Niño Jesús (the infant Jesus), who on December 25th goes about his way dropping off treats and toys.

PÈRE NOËL In France and many other French speaking countries Père Noël is the gentleman responsible for gift giving at Christmas time. Like Father Christmas, Père Noël visits on the eve of December 24th and like Father Christmas rewards good behaviour with gifts. Carrots are usually left in shoes for the sustenance of Père Noël’s Donkey transport. He then reciprocates by leaving the gift within the shoe.

SAINT NICHOLAS In many ways the originator of secret gift giving at Christmas time, Saint Nicholas brings Season’s cheer to many countries around the world. An early starter but also a dogged worker, Saint Nicholas has been known to bring gifts twice – once on 6th of November and then secondly during on the 24th December.

Looking for a price?

Get a Quote online